Another month, another preschool co-op day, another opportunity to make a creative snack for fifteen kids and assorted adults. For March, my husband was the co-oping parent on the last day of pet week. Despite the fact that I’m the one who stays home with the kid, he’s the one who does classroom duty. Trust me people: you do not want me in a classroom with fifteen four- and five-year-olds. That “positive discipline” thing that I sort of manage to do with my only child is most certainly not going to happen in the chaos and noise of many, many children. My husband, on the other hand, is great with kids! So, he wins co-op duty. I support him by making snacks.

On this particular Friday, I was bringing our dogs to class at the end of the day, so coming up with a snack was easy: Pet week? Canine visitors? Why, I shall serve puppy chow, of course! Now, the catch here was twofold. First, we’re a nut aware school, so I couldn’t use peanut butter in the puppy chow (also known as “muddy buddies”). Second, we’re supposed to serve healthy snacks from at least two food groups. I figured in this age of allergy awareness, I could easily track down a peanut-butter free puppy chow recipe. And, frankly, I’d be damned if I was going to give up such an inspired snack. So I thought to myself, “What else do my dogs eat?” The answer was “Fruits, vegetables, cheese, and pizza crust.” Woohoo! I even nailed three food groups. I am awesome. 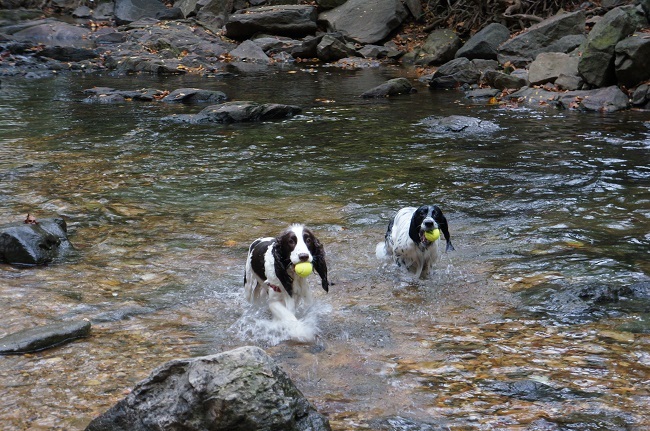 Of course I had to include a photo of the dogs! Say hi to Greyson and Avery

When I chose the fruits and veggies, I selected my older dog’s favorites: pears, apples, and carrots. I made sure not serve anything that can be poisonous to dogs (grapes, I’m looking at you). When the dogs get the occasional bite of cheese—usually when we’re trying to trick them into taking medicine—they get generic American processed cheese product singles, which I upgraded to cheese sticks for the kids. I suppose that I could have gone with pre-made or even pre-baked pizza crust, but that honestly didn’t even occur to me until I was writing this post. Instead, I used my favorite recipe to which I added several shakes of Italian seasoning (my current favorite is Penzeys Spices Tuscan Sunset). Instead of making a traditional round pizza crust, I pressed the dough out to fill a standard jelly roll pan (12 ½” x 17 ½”x 1) and then used a docker to poke the crust before setting it aside to rise. After baking, I cut the crust in half lengthwise, and then into strips to resemble the leftover pizza crust we sometimes give the dogs as a treat. (Also, I served it with pizza sauce for dipping, figuring that, unlike the dogs, the kids might prefer not to eat plain bread. Contadina’s Pizza Squeeze bottles were a huge hit!)

Finally, the pièce de résistance: puppy chow. I found a great recipe by Jess Kielman at her blog Mom4Real. When I made mine, I made a few adjustments:

Jess notes that this peanut-free recipe does taste different than the recipes that use peanut butter, but that it’s not a bad different. Personally, I felt the puppy chow was lacking, but not all my little taste-testers agreed. I had to email the recipe out to the class, and I just learned today that at least one classmate is still talking about the snack a month later; apparently, it was pretty popular. I made it again at home just the other day and had the inspiration to use Quaker Oatmeal Squares cereal (the cinnamon variety). I lived off these things when I was pregnant and I love that they’re not fragile and crumbly like Chex or Crispix. Well, folks, this was the missing flavor from my first batch. The second batch was ah­­-mazing with the hint of cinnamon and denser cereal. Yum. A quick note, though, if you’re playing with the cereal you use: The recipe as written is gluten-free (assuming you’re not using Wheat Chex). It is not gluten-free using Crispix or Quaker Oatmeal Squares; this didn’t matter for my daughter’s class, but may matter for your family or those with whom you’re sharing the snack.

Anyway, this silly snack ended up as one of our all-time biggest snack hits! (And the kids loved meeting the dogs.) A win of co-op day: score for the Fairman family! 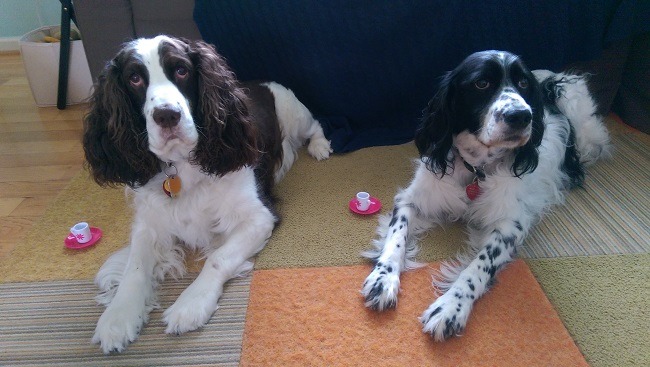 Nothing to see here, folks. Just a couple of dogs having a tea party. 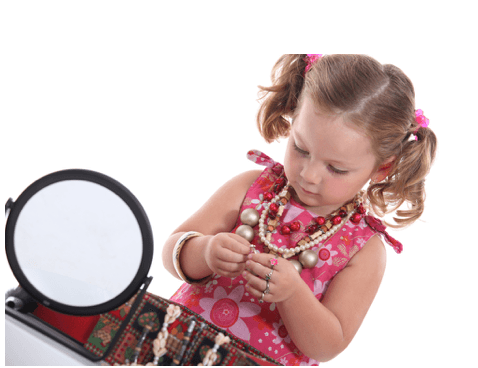 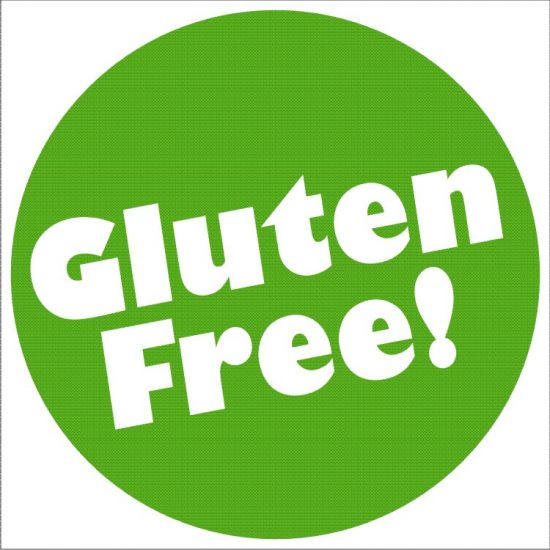