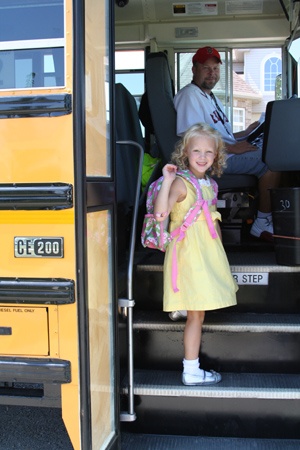 Today was the BIG day!  First day of kindergarten for my oldest child!  We have talked about this day all summer and my daughter has been exclaiming that she is a kindergartener from the rooftops!

Not only is this the first day of school for her but it is the first time that she was riding the big, yellow, school bus.  Nothing is more exciting to a 5 year old (at least in my house!) than riding that fun, yellow bus for the first time!  My daughter was ready for school a half hour early and was pacing by the door anxious for the bus to come.  Five minutes before the bus was to arrive, we went out to the front yard with cameras in hand to document this big moment with pictures.  My big plan was to get a few pictures of her getting on the bus and then again when she arrived home getting off the bus.  That’s the way my scrapbook works, you see!

So, everything went off without a hitch.  Well, at the beginning. The bus was on time.  The driver was friendly.  My daughter was tickled pink to get on the big bus and be on her way to the “big girl school”.  We waved goodbye and she was off.  I even photographed the giant bus pulling away with my little, baby girl in it.  Sounds all good and perfect, doesn’t it?

Now, all I did was have to wait the 3 hours for her to return and come jumping off the school bus happy as a clam.  I watched the clock all afternoon so that I wouldn’t be one minute late to be on the front lawn and greet her on her first day.  Shoes were by the door.  Camera by the door.  We were ready.

I wasn’t quite positive when the bus would actually be dropping her off.  I inquired about the drop-off time at the kindergarten orientation yesterday and was told that they weren’t quite sure exactly when the bus would drop off.  The bus will hopefully leave the school around 3:35pm.  So, the earliest it would be at my door was 3:40pm.  We live very close to the school.  At 3:30, I was outside waiting.  Now, I knew that there would be a few buses going through the neighborhood on different routes from different schools.  Which one was going to be hers?  Well, I didn’t actually know.  I figured the bus that pulled up at the bus stop in front of my house would be hers.  So, I waited.  One bus went by.  Nope, not hers.  Second bus.  Not that one either.  The friendly bus drivers all waved to me as they drove by without stopping.  I’m guessing they realized I was new at this because I had the camera around my neck and started to walk toward every bus that was driving by.  Yep, I am a newbie at this!  I’m standing on the lawn watching bus after bus go by.  A total of 7 buses all looking the same drove by my house.  Hmmm.  I was starting to wonder when she was going to get home.  By now, I had been standing outside for 30 minutes.  I watched as buses unloaded other kids behind my house and down the other streets.  I even watched one stop close to my house and unload what I figured were older junior high kids.  Of all the kids getting off the buses, my daughter was no where in sight.

I kept waiting.  Now, I’m not a Nervous Nelly parent.  Not in the least bit!  If my child is choking on a piece of food, I’ve been known to say “he’s coughing…he’ll work it out”.  Yeah, not a panicer!  But after waiting for 40 minutes for the bus to drop off my 5 year old safely at home, I was starting to worry.  Hmmm.  Clearly she should have been home by now.  Then the phone rings.  It’s her school.  The conversation went something like this:

“This it the secretary at your daughter’s school and I’m sorry to say that there was a bus mix-up today.  Your daughter is now on a bus headed for your home with the principal of the school by her side.”

“What kind of mix-up are we talking about?”

“Well, I’m not quite sure but I assure you that she is on her way right now on the bus with the principal.  They will be there shortly.”

We hung up and in about 30 seconds I could see another bus coming our way.  The bus pulls up and my daughter gets off the bus with the principal in tow.  My daughter is happy but seems a little confused or maybe shook up.  I don’t know why she would be shook up with a “bus mix-up” on her very first day of kindergarten and her first day riding the bus?!?  Hmmm.  Yeah, shook up!

The principal rushes to me apologizing profusely and says she thought I might need a hug.  She could imagine my worry!  I asked her what the “bus mix-up” was and she said, “Well we had a mix-up.  I’m trying to get to the bottom of it.”  And almost in a whisper, she says “she wasn’t on the list.”

Ummm…excuse me?  Not on the list?  The same list that I saw yesterday when I was inquiring about when the bus would be dropping her off?  That list?  The list that HAD her name on it?  Yeah, all that was in my head again.

“Well, I’m trying to figure that out.  It’ll all be fine by Monday.”

And she hugged me, jumped back on the bus and was off!  Yeah, that wasn’t an answer.  Not on the list.  Well, where the hell was she for the past 40 minutes?

I did get a bit of the story from my daughter.  Well, as much of a story as a 5 year old that wants a snack will tell you.  From what I gathered from her story is this.  She rode around on the bus and the bus driver dropped all the other kids off but her.  Since she wasn’t on the “list” he couldn’t be sure where she actually lived.  So, even though she knew her address, the bus driver took her back to the school after the route was finished.  When she arrived back at the school, the principal must have freaked out and had the secretary call us and jumped on the bus with her.

Not a great way to start the first day of kindergarten and her first day on the big, yellow bus.  Hopefully, Monday is better!  Needless to say, I did not get my photo of her getting off the school bus.  I wanted to photograph the principal getting off the bus but was taken aback by the lack of explanation that I didn’t get the photo. 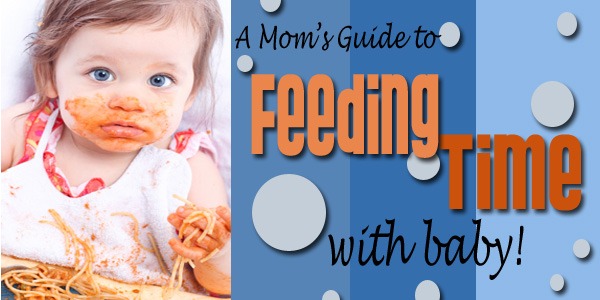 Next
A Mom's Guide to Feeding Time with Baby!
Click here to cancel reply.

Almost the same thing happened to me as a kindergartner! I wasn't sure which stop was mine, and I was too shy to speak up. I stayed on the bus through the driver's whole route, including other schools. I think she finally found me crying on the bench when she returned to the bus lot or something like that. I was eventually reunited with my mom, but I NEVER wanted to ride the bus again.

As a 1st gr teacher, I can assure you that you have a very special principal!!! I've never heard of the principal riding on the bus w/ a child when there's a mix up. That was very nice of her, your daughter is at a great school.

I would just tell her that only the most special and amazing kids get a personal ride home with the principal!!