Christmas Traditions From Around The World

It’s such a great idea to discover what people in other countries do to celebrate Christmas. There are so many different countries and cultures across the world, what do they do at this special time of year? Share these with your family and !

In Ireland, it’s tradition to leave mince pies and a bottle of Guinness out as a snack for Santa (lucky Santa!)

In some parts of Spain, Portugal, and Italy it is a tradition to set up a model village of Bethlehem.

In the Czech Republic, single women perform a ritual on Christmas Eve Day to find out if they will marry in the following year. With their backs to the house door, they throw one of their shoes over their shoulder. If the shoe lands with the heel towards the door, she will definitely stay single for another year while if the front of the shoe points towards the door, it means she will move out of her parents house and she should start making wedding plans.

In Holland, people celebrate the holiday on December 6. They await the arrival of SinterKlaas and his sidekick Black Peter, who come by way of steamer to leave candy and nuts for good little boys and girls who have filled their shoe with hay and sugar for his horse. Find more information here.

For many people in Japan, traditional Christmas dinner is KFC! Read more about where this idea originated from here.

Some other Christmas traditions:

In Venezuela, on Christmas Eve morning the roads of the city are closed to cars so people can roller skate to Mass.

In Germany, children leave out a shoe or boot outside their door and the next morning candies and small toys arrive in them for those who have been good.

On Christmas Eve in Greece, the children often go out and sing carols in the streets. They play drums and triangles and they sing. If they sing well they are usually given money, nuts, sweets, and dried figs to eat.

In Egypt, those who celebrate have a special fast where they basically eat a vegan diet for the 43 days before Christmas. It is called the Holy Nativity Fast.

In Finland, people believe that Father Christmas lives in the north part of Finland called Lapland. Animals are given their own Christmas in Finland. Christmas Eve is very special there and it is traditional to eat rice porridge and plum fruit juice for breakfast.

In Mexico children often perform the Posada (Spanish for Inn). There are nine Posadas and in each one, children are given candles and a board, with painted clay figures of Mary riding on a donkey and Joseph, to process round the streets with. They call at the houses of friends and neighbors and sing a song at each home.

There’s a superstition in Norway that advises households to hide their brooms on Christmas Eve. It is believed that witches and evil spirits will rise from the graves and use the brooms to fly through the sky and create chaos until dawn.

Around Christmas time in Sweden, one of the biggest celebrations is St. Lucia’s Day on December 13. It is now celebrated by a girl dressing in a white dress with a red sash round her waist and a crown of candles on her head. Small children use electric candles but from around 12 years, the candles are real.

In Germany, it’s an old tradition to hide a pickle ornament on the Christmas tree. The first person to find the pickle among the ornaments is said to receive an extra present on Christmas. My family always does this one!

Do you have any fun Christmas traditions to add to this list? We would love to hear them! Leave us a comment and let us know! 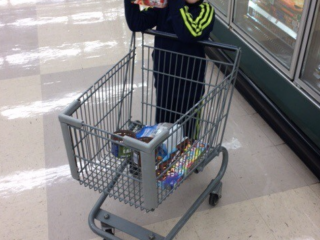 Previous
5 Terrifying Questions From Your Kids

Just to clarify, in Holland we celebrate Sinterklaas on the 5th! of December, but we celebrate christmas as well!!! So we are very lucky as we have 2 special celebrations in one month ;-)