Thank-You Notes ARE a Gift

Okay. I’m a bit behind in addressing this viral post, but that’s because I wasn’t going to say anything about it since I have feelings. But then somebody went and got the kids involved, so here I am. In mid-April, Twitter user Laura Turner shared that a guest at her baby shower started the gift-opening portion of the event off by giving her the gift of “no thank-you notes.” 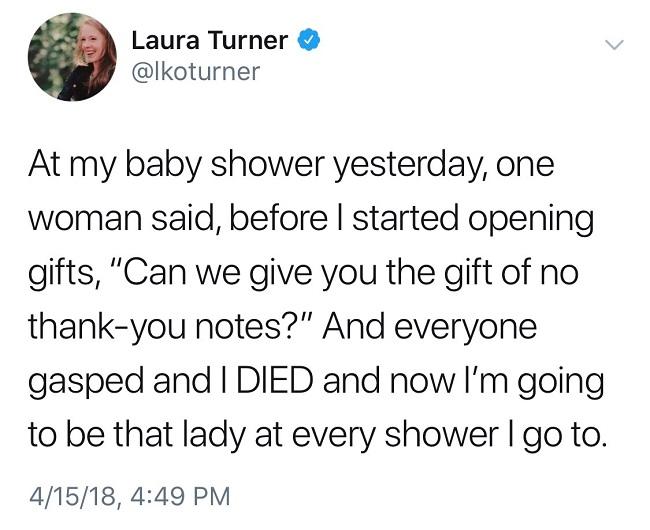 Excuse me, what? Yes indeed, someone just spoke up and said, “Can we give you the gift of no thank-you notes?” According to Ms. Turner, this idea was beautifully received by all in attendance. Judging by the reactions to various posts about her story, I’d bet there were some pretty good actors in attendance at her shower. Because guess what, folks: people want to be thanked—and not just perfunctorily thanked in the moment when you receive a gift. In a situation like a birthday party or a shower or a major holiday when you’re opening a bunch of gifts at once, the awesomeness of a gift may not be apparent. Maybe you don’t have time to marvel over the thoughtful details of something, or you didn’t have time to take it out of the packaging and really look at it, or there were pieces you didn’t notice at the time. Or (let’s be honest) something way more awesome was opened before or after and a gift got shunted to the side. Plus, how many ways can we come up with to say, “Thank you! It’s adorable! I love it!” at one time? We’re not intentionally rude, but sometimes we get excited, or caught up in the moment, or—in case of parties or showers—we have “help” moving things along.

And if we adults can get caught up in the moment and be unintentionally rude, imagine how overwhelmed kids can get. I mean, I’ve had decades to practice and still have a hard time reacting appropriately to presents when someone’s watching (oh, hey there, anxiety and social awkwardness!), so I feel bad for a kid when the giver is excitedly awaiting their reaction. I can still remember giving a child a gift only to have her look at me and say, “Oh. I already have one of these,” and set it aside. Well then. I did get a nice thank-you note in the mail a week later, though! (By the way, in addition to being #TeamThankYouNote, I am also #TeamDontOpenPresentsAtTheParty.)

Anyway, I mentioned that one of my reasons for getting involved in this debate was because I just read a post that encouraged me to think of the children. To think of bribing or forcing them to sit down and write notes by hand, and which—heaven forbid—might have to be erased and rewritten until they were legible. And can you believe that the children might have to write a note to every child who came to their birthday party?! Oh for goodness sake. Yes, yes I can. If little Huxley doesn’t want to have the possibility of writing twenty-five thank-you notes to children who might bring her presents, then don’t throw a giant-ass party and invite twenty-five children. Why are we doing that to ourselves anyway? If you insist on the huge party, you could also go ahead and commit the etiquette faux pas of writing “Please no gifts” on the invitation. Frankly, it’s way less rude on an invitation to a children’s party at an indoor bounce house than it is on formal wedding invitation, but I digress.

Unlike “the gift of no thank-you notes,” it seemed the author of this post wanted to make the argument that a child should be able to get away with a verbal thanks, or an email, or a text instead of a handwritten note. And why? Because like so many things in parenting, it’s easier. It’s easier to let your child say a quick thanks or borrow your phone to dash off a quick emoji-filled text (or use an Animoji—my kid loves using those!) than it is to sit down and help them write (or color if they’re young) a note. It’s easier not to take them time help them understand how meaningful it can be when someone really takes the time express their gratitude, and what it means for them to sit down and do so—to really think about what a gift meant to them; not the thing itself, but the thought behind it. And I think that’s what got me about this post. This is the line that did me in: “Does the child feel more appreciative of the gift after writing out 14 thank you notes? Probably not. He probably wishes at this point that he never got the stupid magic kit.” Well, you know what? As the giver, I’d like to know that. Because, frankly, I’d rather not give him one in the future. 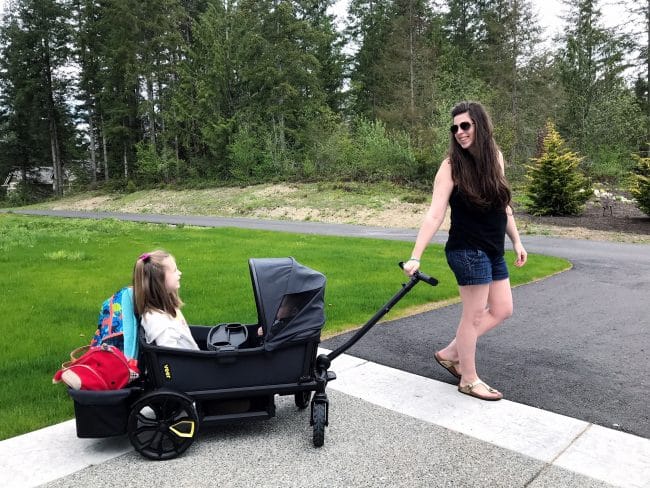 Next
Why I Hate My Instant Pot
Click here to cancel reply.